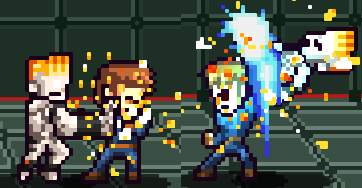 Physical attacks can be normal attacks or even Abilities / Supers

Physical strikes are the most common of attacks in Wishmere. They constitute of strikes that involve body parts: all sorts of punches and kicks. When a physical strike hits another physical strike at the same time, both attacks can 'trade' with each other, where both characters take damage. The attacking hitbox / portion of physical strike can be hit.

As a general rule, most attacks are physical strikes unless stated otherwise.

Whether the attack is a normal, Ability or a Super, if attacking with a strike that constitutes a portion of a character's body part, it still counts as a physical strike.

Throws are close ranged attacks that are unblockable. When a throw is successful, both the attacker and defender are invincible to all attacks until the throw animation is complete.

In the Command List, a Comboable attack is denoted by a red burger and drink icon.

In the Command List, a Super Cancellable attack is denoted by a bright red burger, drink and fries icon.

Generally, a move that does over 5.6 chip damage constitutes as a Guard Eater.

In the Command List, a Guard Eater move is denoted by a light blue plate and cutlery icon.

In the Command List, an Anti-Air move is denoted by a green rocket icon.

In other fighting games, Chain Moves are similar to a command move.

In the Command List, a Chain Move is denoted by a yellow clapperboard icon.

As with the norm in fighting games, hitstun refers to a state in which a character enters when they are hit by an attack. How long that character is stuck in a hurt pose refers to the length of the Hit Stun. Different attacks lead to differing amounts of hitstun and are dependent on the type of attacks.

Hitstun is the most common type of hit status in the game.

A knockdown is when the opponent is taken off their feet. Usually, this is favorable as this gives the attacking character time to strategize or move to different / more favorable location. If trying to buy space from an opponent, the further the knockdown distance from you, the better of a knockdown the attack is. 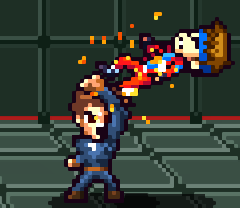 A launcher is an attack that pops the opponent up into the air, opening them up for a combo / juggle.

Slideback is a state where, once being hit by a particular attack, the opponent slides backwards on their back, creating a line of dust. After sliding a certain distance, they fall naturally to a floor state. During the time of when they are in slideback, the attacking character can combo the opponent for additional damage. Do note that an opponent in slideback is considered airborne. After a slideback, recovering opponents will be unable to perform a Quick Getup. 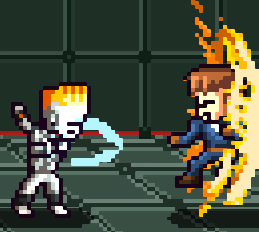 Wall splat is a status where the opponent flies backwards towards a wall. When they make contact with wall, they will stick to the wall's edge for a moment and then fall down. The opponent is vulnerable and can be comboed during the stick state of the wall splat. Take note that an opponent stuck in a wall splat is considered airborne. 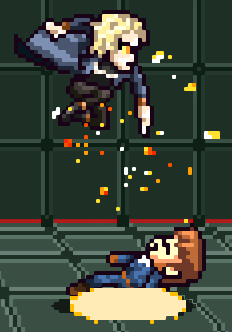 Slam is similar to a floor bounce or an ordinary attack that sends the opponent down towards the floor. However, what makes Slam unique is that the opponent does not bounce off the floor, but instead goes immediately into their downed state. The biggest advantage to a slammed opponent is that they are unable to tech or perform a Quick Getup.

Certain moves cannot be blocked, no matter the amount of defender's Guard Gauge present. Unblockable moves are rare in Wishmere.

Invincibility is when a character is invulnerable to attacks. Generally, invincibility in Wishmere involves invulnerability to all types of attacks (physical attacks, projectiles and throws). This does not mean a move is entirely invulnerable, as moves with invincibility tend to have select frames where they are invincible.

Generally, most Ultimate Arts have some form of upper body invincibility during it's startup and execution. Moves with the Anti-Air property tend to have some frames of invincibility to physical attacks. 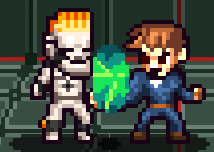 Autoguard is a property on a move where if the attacking character is hit, they will automatically guard the attempted strike, continuing on with their move. The character with autoguard does not take any damage nor will they lose any portion of their Guard Gauge.

It's important to note that some moves only have a few frames of autoguard, rather than the entire move having autoguard. 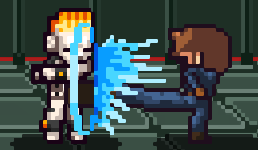 Armor is a property on a move, where an attack makes contact with a character, the character will absorb the damage but continue on with their move. The character with an armored move can be KOed if their health is too low and they are hit during their armored move.

Armor in moves usually only last 1 hit, and thus multihitting moves or a string of attacks is the best way to deal with an armored move.