Unbreakable Throws are your mix up

To perform a Guard, press and hold the Guard button (

). This can also be done while jumping to perform an Air Guard.

Guarding (or also called blocking) is vital to defending against opponent's attacks. In Wishmere, guarding an attack will not cause any damage to your character, regardless of the type of move that is guarded. Instead, holding Guard will slowly decrease your Guard Gauge. When successfully blocking an attack, the Guard Gauge will take 'chip damage' from the attack. Your Guard Gauge replenishes slowly after a brief cooldown of not using Guard (irregardless of whether you are attacking or even taking damage).

If you are thrown while guarding, the opponent's throw will become an Unbreakable Throw. An unbreakable throw is denoted by the red 'X' appearing on top of the opponent, rendering the throw inescapable, so be aware to release the Guard button (

) when defending against a throw.

Do note that characters have a specific amounts of Guard Gauge. Below is a table denoting each character's Guard Gauge amount.

The light blue bar is your Guard Gauge

For all characters, an emptied out Guard Gauge (where the character has not been Guard Crushed) takes 40 seconds to completely refill.

As a defensive option other than guarding, you can perform a backdash, which can only be performed while guarding. Check the backdash section for more info. 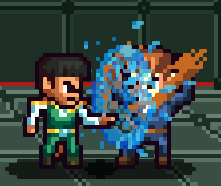 Don't get Guard Crushed, as it puts you in a vulnerable position

Flashing white when the Guard Gauge is low

Quick Getup is a maneuver used to rise off the ground immediately after being knocked down. During a Quick Getup, your character flashes white and is fully invincible to all attacks for a brief period of time.

There are 2 types of Quick Getups: Ground or Air:

while your character is floored.

while your character is floored. Holding

will make your character do an Air Quick Getup straight up in the air, while holding

will make your character performed an Air Quick Getup Backward or Forward respectively.

The Quick Getup can only be performed in the early frames of when your character is knocked down.

Nullifying a throw is to read the mixup

Throw Breaks are the only way to escape a throw that has made contact with you. When successfully breaking a throw, both characters will break off and slide backwards simultaneously. Both characters will be at an even ground frame-wise. You can also throw break air throws.

To perform a throw break, press

Only normal throws can be broken, while Ability / Super throws (like Spritz's Juggernaut Explosion) cannot be broken. You are also unable to break Unbreakable Throws.