The Invaders hail from all corners of the Earth. They were chosen by Doubt to provide a massive force of numbers to invade multiple locations over the world. Their sole purpose is to overrun their enemies by sheer number. 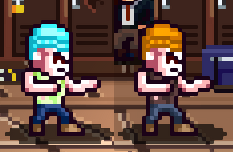 He's crazy and he's not looking for Lennie.

Take him seriously or he'll give you a haircut.