To walk, tap or hold

Walking is the most basic and safe movement in Wishmere. Though it is the safest, it is also the least quick. Walking can be used to close short distances or when you want to escape an approaching opponent. Do note that every character has differing walk speeds. 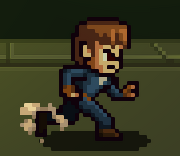 To perform a run, tap

and keep the direction.

Running is the fastest form of movement in the game. Running can be used to cover long distances and getting in on an opponent is the shortest amount of time. It can also be used to get away from an opponent in a quick spurt. During a run, you can cancel into moves, a jump or block.

Note that not all characters have a run, as both Spritz and Doubt do not have a run.

Doubt has unique short teleport dash that is invincible for a small window.

Outside of when Overclocked is active, Spritz does not have a run or a dash.

As with most movement in the game, each character has differing run speeds. 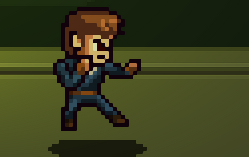 Invincibility on the early frames of the backdash

To perform a backdash, tap

while holding the Guard button. During a backdash, players are unable to cancel into any attacks / actions until the entire backdash (including the landing animation) is complete.

Backdashing provides a relatively safe way to escape your opponent's attacks. Backdashes have a small window of invincibility during the starting portion of the backward dash, but are vulnerable during the startup and landing portion of the backdash. The invincibility window and ability to get some breathing room from your opponent makes a backdash a good alternative to blocking, especially if your Guard Gauge is low.

A backdash allows for players to time their escape correctly, but must be used carefully. Backdashes are good to use to avoid pressure or a potential mixup situation, especially since a backdash is completely invincible to a normal throw.

Every character has their own backdash distance and invincibility window, making each backdash different.

A good way to get around, but vulnerable to Anti-Airs

To perform a jump, press the Jump button. During a jump, players can hold

to move to the left or right. Once an attack button is pressed however, players cannot move in the opposite direction in which they are facing.

There are various types of jumps in Wishmere, all with their own uses.

The most basic jump is called the normal jump. The normal jump allows for unhindered left / right momentum, also allows for the option of a double jump and naturally, allows a player to evade ground based attacks. A normal jump is important to getting around the stage and avoiding attacks from an opponent.

Keep in mind that during a startup of a jump (the pre-jump animation) and the jump landing animation of a jump, though brief, cannot be cancelled and thus you are vulnerable for a brief moment during both points.

Pressing the Jump button during a normal jump will perform a double jump. A double jump's height is shorter than and the distance covered is much less than a normal jump.

You can also perform a jump cancel from a Cancellable jumping normal attack that makes contact with your opponent. This can be useful for extending attack pressure or extending air combos.

A double jump behaves similarly to a normal jump, but with a reduced upward trajectory than the first jump, so it is wise to not overuse the double jump as it's somewhat stationary movement keeps you in the same position and may open you up to anti-airs.

Only Pandy is able to 'triple jump' by being able to jump out of an airdash.

A long jump is the most balanced of jumps in Wishmere. A long jump is a jump with a higher trajectory and a faster rise than a normal jump, allowing to reach airborne opponents or evade situations faster. Due to it's different height provides a mixup of aerial approaches. However, long jumps have a slight reduced left / right momentum while in air.

During a long jump, your character will be unable to double jump or air dash.

Super jumps are the highest jumps in the game. Though it is the highest jump, it is also the riskiest form of movement in the game and also provides the least left / right momentum, practically keeping your character horizontally stationary.

To perform a super jump, hold the Jump button down till the maximum duration, while holding down. Your character should jump extremely high and have a dust effect at their ground position. The startup for a super jump is the same length of a long jump, but left / right movement is greatly decreased.

During a super jump, your character will be unable to double jump or air dash.

An air dash is versatile movement

To perform an air dash, tap

while performing a normal jump.

Air dashes are the most versatile forms of movement. They can be used to approach an opponent, evade projectiles and / or attacks, or retreat from an opponent to buy space. Similar to run speeds, each character has differing air dash speeds.

An air dash can be cancelled into an attack during the forward dashing portion of the air dash.

Only Pandy is able to air dash after a double jump.