Hard Attacks are the heavier normal attacks in a character's moveset. Used to start a damaging combo or inflict damage, hard attacks are slower to startup and recover than Light Attacks.

Similarly to Light Attacks, characters can perform a various hard attacks by pressing a direction ( 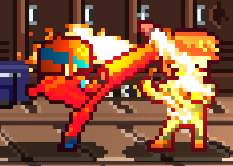 Abilities are the special moves of Wishmere

Abilities can be comboed into from cancellable Light and Hard Attacks.

With super meter present, Abilities can also super cancel into a Super Art or Ultimate Art.

Though an Ability is a special move of a character's moveset in Wishmere, they may not always do the most damage (or chip damage).

Like Light Attacks and Hard Attacks, every character can perform a plethora of Abilities by pressing a direction (

while jumping. Do note that there are instances where some characters do not have Abilities during running (like Dove, Spritz and Doubt for instance).

A ground throw and an air throw.

To perform a throw, press

. Holding the opposite direction you are facing after executing your throw attempt will make your character turn around and perform their throw, which is ideal for escaping the corner or placing your opponent in the corner. You can also perform an air throw by pressing

Throws are close ranged unblockable attacks. When executing a throw, your character will reach and attempt to grab the opponent. If they are close enough, your character will proceed with their throw attack. Throws are quick with a small window of startup. During a successful throw, both the attacker and the opponent ware fully invincible to any other attacks or projectiles. Throws are usually highly prorated moves, thus their followups will be dampened in damage.

If a throw is missed, your character will be open for a punish momentarily.

A throw can be broken if you press

when your character is just about to thrown. You can read more about Throw Breaks in the Defense section. 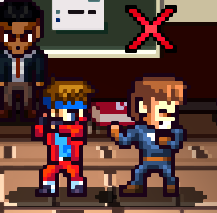 If you successfully throw an opponent that is guarding, the throw will become an Unbreakable Throw. An unbreakable throw is denoted by the red 'X' appearing on top of the opponent, rendering the throw inescapable and guaranteed damage.

As Wishmere's main true mixup, it is good to mix in a normal throw into your offensive approaches to open up your opponent's defense. As many (if not all) normal throws lead to combos or favorable situations, netting extra damage and thus functioning similar to a low poke in other fighting games. Throws have quick startup and the possibility of reading your opponent to creating an Unbreakable Throw makes guarding too often risky. 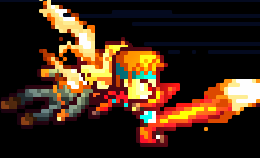 The most damaging move in a moveset.

Supers usually have some form of invincibility upon startup, and in most cases deal a large amount of damage.